We taught ourselves the right from wrong, Ms. Mensch 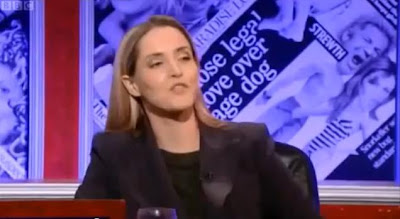 A thatcher is someone who makes a roof
or used to, when things were quieter,
was someone who sheltered people
from the rain, when things were quieter.
A thatcher took folks from the wind
and layered the skin of a human weather.
Now a thatcher exposes the dwellers,
rips off the roof in the skinning wind,
hurls down the roof on the dwellers,
who for cover snatch at the straws
the roof-makers rains
on their rainwashed heads ruthlessly
and in their teeth and in their eyes
like a war
that the thatcher unnaturally makes
on the dwellers. And the luckier,
snatching more straw cover of the undoing
thatch, despise the unluckier, the colder ones,
so that some see but many don't
or do see but not why, and think it
the way of a brave wise thatcher
that their fellows are icy and cold
in an inhuman country.
- Judith Kazantzis, 'A Thatcher' (1984), Red Sky at Night: an anthology of British socialist poetry (Nottingham: Five Leaves, 2003, p.204)

How odd to accuse someone of being 'deranged' after you have made the most simplistic, smug attack on protestors imaginable?

Baker, Hislop and Merton are presented with an open goal to demolish an inept 'argument'. Of course, it is not as if she is any more diligent in her role on the Media and Communication select committee. As well as her partial attendance and supplying of Murdoch with facile questions, she is campaigning to reduce workers' employment rights: Mensch is indisputably following in the path of Baroness Thatcher. A well-to-do middle-class smugness may seem far apart from the protestant work-ethic mania of her idol. However, same mean-spirited prejudices, same inequitable policies.