No you can't go back

PJ Harvey on the Andrew Marr show last Sunday - 'Let England Shake'. It felt as if a new country was willing itself into being. With the curious shots of Marr and Brown watching the performance intercut with the performance itself: eerie forties American sample - 'take me back to Constantinople / no, you can't go back to Constantinople' (covered by the Residents) - and PJH, raven-like, with a ghostly autoharp refrain:


However many caveats I might attach to a vote for the Liberal Democrats, I am much closer to that position now in my seat - with a choice of Labour, LD, Con, BNP, UKIP in Sunderland Central.

If Clegg can make the case for Europe tonight, we could be in a different area altogether... Brown is likely to weigh in alongside Clegg regarding Cameron's shameful alliance in the European Parliament, associating with homophobes and racists. Maybe the Clunking Fist might be able to do some good at last.

Any reservations I most certainly still have about the LDs are submerged whilst they are the appointed enemies of the Mail and Murdoch. All the more reason to get behind them, to try and gain greater democracy in Britain; with potential of future social-democratic consensus.

Brown might come to be seen as enabling some positive change... Most especially if we get a result close to my prediction a few weeks back (with surely a greater number of LDs than I anticipated). A referendum offering STV, AV and PR would surely be a must if the LDs gain to the extent that is possible.
Posted by Tom May at 20:42 No comments: 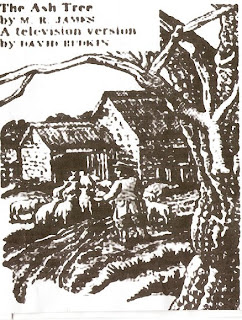 'there is also this passage, which I transcribe for the sake of the light it throws upon the course of events, and also upon the common beliefs of the time: [...]'
M.R. James, Collected Ghost Stories (Ware, Herts: Wordsworth Classics, 1992, p.33)

'The Ash Tree' is a mixture of historical investigation, travelogue and drama: 'And so ends the first act of the Castringham tragedy'. (p.34)

The oddly Italianate Suffolk is perfectly evoked in a lengthy, digressive opening. Past misdeeds, learnedness and loneliness seem intrinsic to this adventurous county of Benjamin Britten and Brian Eno. There are few landscapes as odd in blighty: the juxtaposition of purplish Dunwich Heath with beach and apocalyptic Sizewell Nuclear Power Plant. Time-frozen parish churches that reminded me of Dad's Army, secretive WW2 and Cold War radar sites, villages of 17th century timber housing oddly familiar from Lovejoy; genteel seaside resorts like the becalmed Aldeburgh and the slightly more bustling Southwold, both with distinctively pastel coloured beach huts and houses. Strong, dark Adnams Broadside ale. Weird examples of architectural planning, such as in Thorpeness.

The dating of the different occupants of the house is typically precise: 'Those who are interested in the details will find a statistical account in a letter to the Gentleman's Magazine of 1772, which draws the facts from the Baronet's own papers.' (p.35)

M.R. James ploughs the most English of furrows, in playing upon the mythical and historical exactitude, and their discordance. There is the antiquarian's concern with old books and libraries, inevitably worked into the opening reverie on Suffolk: 'I like the library, too, where you may find anything from a Psalter of the thirteenth century to a Shakespeare quatro.' (p.30) Several of the protagonists have scholarly leanings, as is usual in James; for example, William Crome, the grandson of the erstwhile vicar.

The Michael Reeves film Witchfinder General (1968), almost exclusively filmed in Jamesian Suffolk, comes to mind in Sir Richard's foolhardy burning of Mrs Mothersole's empty coffin, reviving 'for a time all the stories of witch-trials and of the exploits of the witches, dormant for forty years.' (p.35) History will not relinquish its grip, its fascination; James's characters and landscape (from whatever stage in time) resound with the past. It seems natural for James to set the climactic part of his story in 1754 and then have characters who have never previously met striking up an acquaintance based upon familial history: upon meeting William Crome, Sir Richard says, 'the name of Crome is always a passport to Castringham. I am glad to renew a friendship of two generations' standing.' (p.37)

The 'Castringham sickness'. Matter-of-fact, localised tragedy. There is an unknowable quality to the sequence of events which is chronologically related; as ever in MRJ, there is no visible violence, but rather the suggestion of malevolence; no marks of violence, but a window left open. The initial suggestion that it might a squirrel running up and down the stem of the ash seems plausible enough, and even when we get clearer elucidation of the threat, it is left opaque, mystical almost: 'Such a nest of catarrhs and agues was never seen.' (p.37) Ultimately, as is the case in other good weird fiction - and indeed pure cinema - 'the reader must judge for himself.' (p.31)

The topography of the house and its grounds is methodically set out, James creating an eerie atmosphere. It will be interesting to see whether David Rudkin's Ghost Story for Christmas version (TX: BBC1, 23/12/1975) manages to capture the subtle dread of the Jamesian prose. From watching Rudkin's previous Play for Today, Penda's Fen (TX: 21/03/1974), it would seem Rudkin would be an ideal adaptor of this sort of English piece, which is so much about the pull of landscape and ghosts of the past.

Hope for the future was implicit: the Poll Tax revolt, Thatcher's ousting and these songs of the day...

... Yet the future meant more Murdoch; Gazza embodying the ruination of masculinity. There might have been sensitivity, togetherness, yearning techno and Saint Etienne at the top of the charts; there was instead Sky TV and laddish 'Britpop' luddites. Tony Blair, not John Smith. 'We ain't no hooligans' proclaimed proudly, only for the English mad-dog to rear its head again with the disgraceful scenes in Sverige 1992. A window of opportunity for civilisation, quickly slammed shut as things soured.

The uncertainty in Sumner's voice was all too justified.
Posted by Tom May at 20:13 No comments: