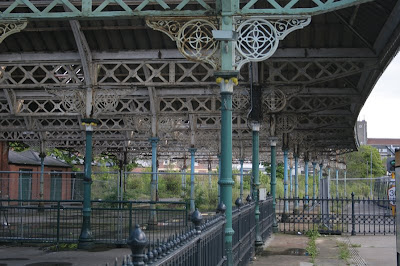 'There were none of the rags and tins and broken food about that you find in a place where many beggars are used to stay.'

To begin the fourth week is from a collection of short stories bought at Tynemouth Book Fair, held in the evocative Victorian train station (still very much in use as part of the Tyne & Wear metro line). The fair was superb, and really required a whole day's perusal, with relief for lunch in the middle. I had to be back to play some football, so only really got around 50-60% of the main Book Fair in around two and a half hours; there were stalls from all around the North-East, and as far away as Selby and Huddersfield. The other half of the station was being used for the less specialist weekly market. A full day will be spent in the next one of these in late June, and indeed at a 'working class' book fair to be held in Sunderland at the Museum Vaults pub in mid-June (around the 25th anniversary of Orgreave), which has being extensively flyered.
All of this week's stories will be drawn from collections of shorts purchased today. The first is from the author Richard Hughes, most famous perhaps for A High Wind in Jamaica (1929), a novel in the RL Stevenson tradition of riproaring adventure and apparently an intrinsic sense of the terrain between child and adulthood. The volume is an Oxford University Press collection of Classic English Short Stories, originally published in 1939 as English Short Stories of Today - it also includes stories by Galsworthy, Somerset Maugham, M.R. James, H.G. Wells, Dorothy L. Sayers and the Scottish socialist Naomi Mitchison.

'A Night at a Cottage' is almost a textbook example of how to craft a ghost story; very brief, chosen as I am struggling to get back on track with reading and writing about my 'one a day'. There is not a great deal of depth or ceremony about this story; Hughes simply gets on with delivering macabre chills in as few words as possible. The impression is of the narrator having to get the story out of him, placed under some constraints - as perhaps indicated in the way it ends. The extended clauses of the opening sentence establish exactly the sort of Gothic ground being trodden upon: 'On the evening that I am considering I passed by some ten or twenty cosy barns and sheds without finding one to my liking: for Worcestershire lanes are devious and muddy, and it was nearly dark when I found an empty cottage set back from the road in a little bedraggled garden.' (p.38) There has been heavy rain earlier in the day. It is also established that the narrator has recently left Worcester jail, now surfaced possibly as a fugitive - and certainly not wanting to return. (p.39) The ambiguity quite as to the 'various reasons' why our unnamed narrator does not want to return there, is typical of a story that revels in what it omits.

Unsurprisingly, I tend to intepret this Worcestershire as the mythologised Worcs. of Elgar and Rudkin; deepest England, if not entirely as associated with weird fiction as other counties might be. It seems apt to wonder whether the devious lanes include a sign for Pinvin at any stage. In its central motif of the drenched intruder, the story does attain a diabolic power akin to an M.R. James miniature, or a less ceremonious Dennis Wheatley (who I will concede I have never read). The fellow fugitive, the stranger who relates the story of the cottage owner's drowning of himself, turns out to be rather more than he might seem... He is also given a colloquial mode of speech - 'Gho-asts' 'fo-aks' 'hisself' 'childer' 'Drownded' (p.40) - that may have been fairly common in conemporary horror, if one is to go by the satirical horror classic, The Old Dark House (dir. James Whale, 1932), itself adapated from J.B. Priestley's novel Benighted (1927).

I enjoyed the brevity of this; Hughes conjures a limited but potent ghost story that does not waste a word. This is not really one to shake you to the core, but it delivers an agreeable measure of eerieness.