Who closed down the Community Centre? 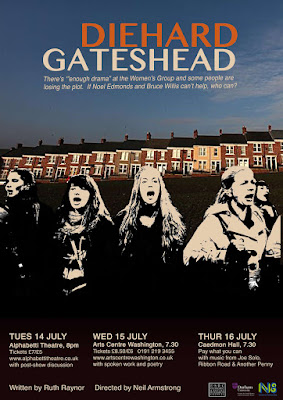 It wasn’t quite Byker Grove meets Brecht, but while that is a pleasing notion for the noggin, this was tangibly necessary: a humane, subtle drama about austerity and its impact on community. Not placard-waving, confrontational agit-prop but a demonstration of what our people are like; this is who you are trying to do down and what you are trying to take away, Mr Osborne.

There is a place for political theatre, and the time is surely now. We’re faced with an arrogant government, on a low-turnout 37% vote-share ‘mandate’, that looks to further curb trade unionism, cut back legal aid, turn education into solely a financial transaction, close libraries and open up the countryside to the moot practice of fracking. An administration that is seriously considering making people save up for their own sick pay.

Raynor has spoken of being inspired by the writing of the likes of Alan Plater and Tom Hadaway; the influence shows; something of the jovial, egalitarian spirit of Plater is transposed to the inexorable treadmill of austerity Britain in 2015. She sets the piece in a Gateshead Community Centre, which has just about kept going through already harsh financial ‘economies’ in previous years. 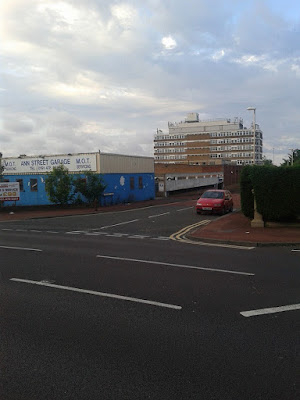 The Gateshead parliamentary seat has the 92nd highest unemployment rate in Britain (5.9%) and the 26th highest seat with constituents who are in very bad health: 2.07% 34.45% live in social housing – also 26th highest out of 600+ constituencies. 30.47% of people have no qualifications. 22.55% of people hold no passport. While UKIP did well here in the last General Election, finishing second with 17.8% of the vote, this was considerably less well than in Tory seats in Essex and Kent or coastal north east constituencies such as Blyth Valley and Hartlepool. Only just over one in ten of the 'Heed' electorate voted UKIP. This play does not engage in the media habit of assuming that this vocal minority therefore demonstrates that the people of Gateshead have a resentful, insular mind-set.

Raynor has commented that her play ‘was built with the kindness of a Tyneside women’s group. Participants took part in a range of workshops and interviews and gave feedback on two drafts of the script. Because of cuts and changes to the terms of funding the group is no longer running.’

There is a complex dissolving of hierarchies within the Centre's women’s group, which is not homogeneously this or that (working-class, middle-class, underclass), but is carefully pitched and realistic to the locale. The older community centre worker Lesley, with her beliefs in Noel Edmonds – false-consciousness subtly and funnily highlighted – and the feint but palpable class memory coming out in Sandra when she talks about the ‘New’ Jarrow March and its Facebook group. The strong women of this play - chiefly Lesley and Sandra - mirror Heather Wood of Easington Action Group, who I saw speak forcefully and eloquently of practical community campaigning at the recent Durham Moot event.

Lesley (Judi Earl) is the convenor of the group, unpretentious and grounded, yet with odd ideas about self-help. Katie (Christina Berriman Dawson) is morose, glowering and reluctant mother of six, but who grows into the action and with the group. Sandra (Jessica Johnson) is the most forthright and belligerent, with a rough way with words, and who is incredibly articulate. Julia (Arabella Arnott) seems like she'll be an overly stereotypical materialistic middle-class lass, but isn't quite so clear-cut. Rosie (Zoe Lambert) is the theatre project leader, idealistic and driven, if less worldly than she might think. The cast is uniformly excellent, able to veer seamlessly between gags and pathos.

The play mixes and contrasts high and low cultural references – the ancient Greek Orpheus myth with Die Hard and Crinkly Bottom. This is necessary to take the audience with the action, and weave in the political ideas. What does this say to me about my life? You feel that Raynor is pondering and addressing this question for a wide range of local audiences – the play was also staged at Newcastle’s Alphabetti and the Washington Arts Centre. Music is shrewdly used: from a looped intro from recent-ish pop that I cannot place, to two Crowded House tracks, including the apt melancholy of ‘Don’t Dream It’s Over’ to close.

She also astutely includes a mixed lexical register of “shite”, “asset management” and “wifey” and the ace wordplay of “Start Arts”. As well as posing the comical interrogative: ‘Remember Blobbyland?’ There is some sense of language being contested, while the financial parameters are set from Westminster.

Ruth Raynor’s play is more Mhairi Black than Liz Kendall. It is controlled, funny and tender and yes, it is angry. There is class consciousness and compassion for disparate people. We need this sort of thing on telly, and a better BBC to produce many new and proudly low-budget single plays in place of high-cost adaptations and costume serials.

In post-Chavs era, we should have seen the back of grotesquely stereotypical representations of the working or under-classes. I don’t think we have. Nor does Raynor, who knows that current snobbery is the path to decay; she doesn’t just see the best in people, but sees that drawing lazy or prejudicial distinctions is not the way to live your life. The play carefully displays human differences and foibles, but implies that only in acting together – metaphorically and literally – can we laugh and connect, or indeed achieve anything of lasting worth.
Posted by Tom May at 11:08